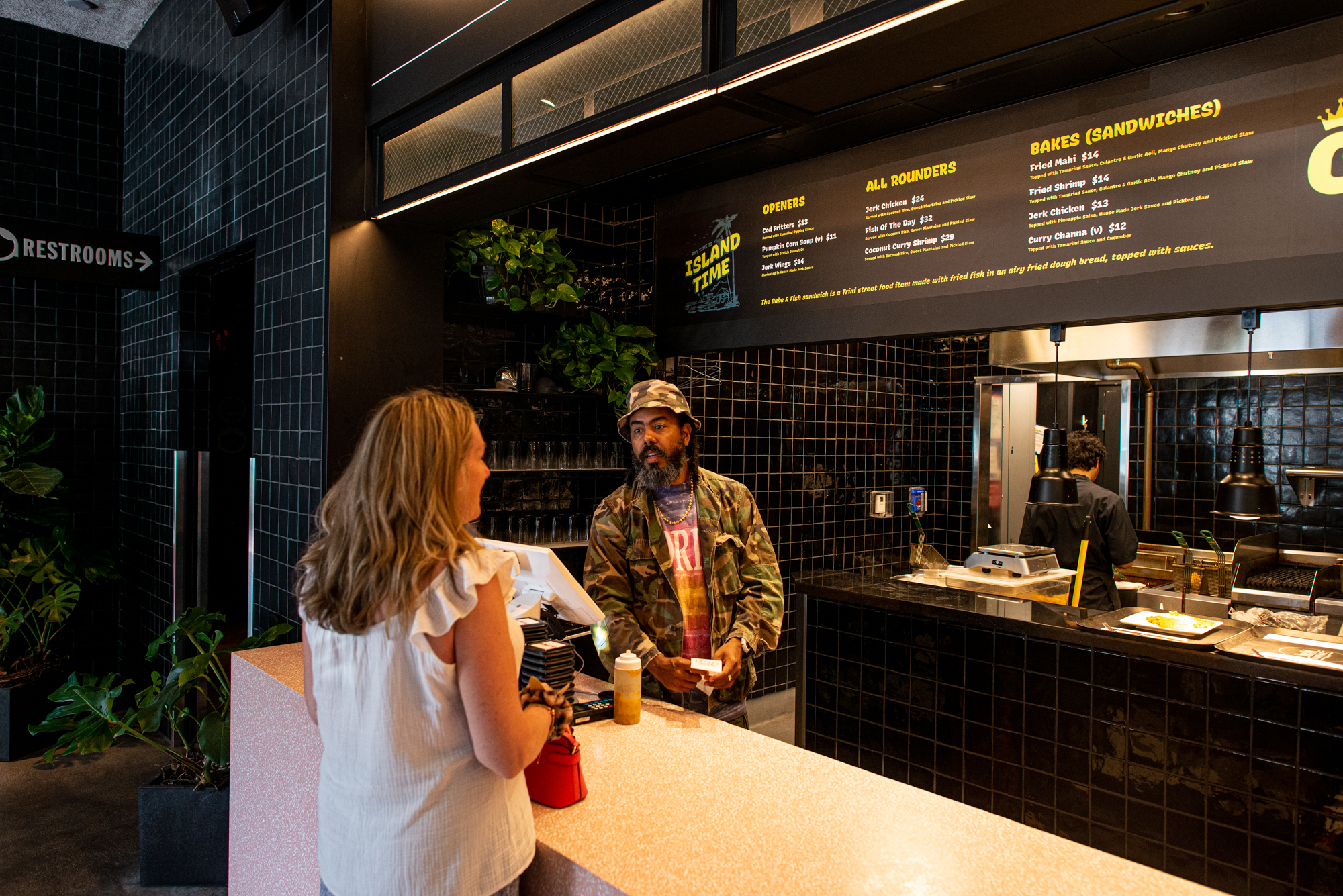 “Clyde’s Caribbean” at Time Out Market in South Beach

After years of traveling to Miami I’ve done everything in my power to avoid South Beach. However, the oxtail grilled cheese at Clyde’s in Timeout Market has brought me new hope. As it turns out, there is actually something worth sitting through  mind-numbing, spring break-induced traffic. Now don’t get me wrong I like the beach, the bikini dress code and oh boy do I love the day drinking. But something about the almost mandatory pressure for everyone visiting South Beach to act like a reality TV star on the E Channel has become a bit of a turn off. But all of the Miami craziness melts away at Clyde’s.  A Trinidadian restaurant that has managed to stay rooted in traditional Caribbean cuisine, with just enough amount of trendiness. An art carried out quite masterfully by the founder Christopher “Jillionare” Leacock.

Before I learned about Chris’s passion for cooking I was a fan of his music creations. Former member of the internationally renowned band Major Lazer, Chris had been sharing his talents with the world long before Clyde’s was a concept. After meeting him at the original Clyde’s in Williamsburg BK(they had the best rum punch ever by the way) I kept an eye out for his latest pop ups and restaurant collabs. So when I heard all the praise about his new venture in Miami I had to check it out for myself. I linked up with Chris on a very hot day in South Beach to discuss the origins of his culinary skills and how’s Clyde’s Caribbean came to be.

Where does the name “Clyde” come from?

Clyde is, in fact, named after my grandfather. In retrospect, he’s been the biggest influence on my personal aesthetic.

Who taught you how to cook?

My mother is an excellent cook, and my grandmother (Clyde’s wife Josephine) was stellar – she made huge lunches every Sunday, and her pepper sauce was famous all across the island. My mom excelled at cooking for 2, or 3, or 30 people, and she’s very good at handing down precise recipes and techniques.

Has opening a restaurant or cooking professionally always been something you wanted to do?

I love to entertain – growing up, we’d have huge ‘limes’ (impromptu parties) at our house for Divali, and on Boxing Day. My mom would cook a bunch of food, friends would bring drinks, and we would talk and laugh into the wee hours of the morning. In university I would throw parties and DJ at the campus bar for fun – I opened my first cocktail bar and event space around 2007/ 2008. The common thread across all of my creative endeavors in the US – whether in film, music, visual arts or cuisine – is to provide context for Caribbean culture, while maintaining a high degree of authenticity.

Do you come up with all the dishes at Clydes?

I use to have a restaurant in Williamsburg, and most of the recipes were developed there, by Chef Paul Simeon and my great friend Ria Ramkissoon, who I’ve known (and been working with) for years and years. We made some changes and updates when moving to Miami. Shout out to Chef Adrian Forte for Oxtail Grilled Cheese.

So many Caribbean restaurants seem like they don’t know how to take home recipes and make them for the masses. How did you make that transition?

The biggest challenge facing Caribbean Cuisine is consistency. In many restaurants and kitchens, you can literally “taste” who cooked the food. This one likes to cook with Allspice, that one don’t put enough pimento, a next one like their curry watery, another one likes it thick. As such, there is no ‘standard palate’ for Caribbean Cuisine, in the way that we know what a Chinese fried rice should taste like, or a pad thai, or a birria taco. A lot of it really came down to standardizing our recipes and our prep process, so that we could deliver the recipes and the technique in a way that the food is consistent day after day, cook after cook.

How has traveling while doing music effected your cooking?

I was able to visit some of the most amazing kitchens in the world, not just the 3 star spots like Noma and Osteria Francescana, but to make friends and step into a world of flavors from Sydney to Cape Town to Jakarta and more. Shout out to German and the Nino Gordo chicos in Buenos Aires, Mitch and the old Acme gang in Sydney, Matty and the Yardbird team in Hong Kong, Nik and the Slurp Ramen crew in Copenhagen, and Richard’s Bake & Shark in Trinidad. Apologies to anyone that I may have missed, it’s all love!

What’s you favorite meal to cook at home?

Besides Trinidad, what other cultures have influenced your cooking?

Will we see other Clyde’s locations in the near future?

That’s the plan! We started off by doing a few ‘pop ups’ across Miami at OTL and Melinda’s and so far we’ve taken the food to Soho House in Canouan, Nino Gordo in Buenos Aires, back to Soho Beach House for F1 Weekend, and we’re headed to Cabo San Lucas and a couple other cities this summer. The goal is to secure a standalone spot in Miami and eventually grow into other cities.

I really enjoyed the “Digital Beers” series you were doing on Instagram. Isthat something you’d like to continue doing?

I enjoy chatting to people and I always had the idea to do a podcast where I could interview friends and talk to them about the things that they’re passionate about, not necessarily just what they’re known for.  Maybe it will resurface in a similar or newer format, we did make some fire merch that we never dropped! The pandemic provided sort of the perfect storm for those types of conversations. People were at home and looking for connection, and in some sense my guests and I were able to provide that.

Interview: After the Clubs it’s the BBQ!